Posted by admin on Tuesday, October 19th, 2021 in Fire Ant Treatment
no Comment.

Fire ants are a nuisance, their mounds can wreck your magnificent landscape or lawn, and their stings are painful and itchy. Fire ants will aggressively and fiercely protect their mounds, whether interlopers accidentally or deliberately disturb their mounds.

Fire ants feed on almost anything, including animals, plants, other insects, carrion (decaying or dead animals), seeds, young tree bark, and other foods. There are many species of fire ants, but Red imported fire ants are the most common. Fire ant exterminator in your home or property is a matter of comfort, safety, and household aesthetics.

Identifying fire ants is not easy. Even Red imported fire ants, which are known to be red-brown and black, can sometimes appear in other colors depending on the type of soil in their mound or surroundings. Below are signs that can tell you whether you have a fire ant colony as your neighbor:

Their Mounds Have No Center Hole

Unlike other ant mounds, fire ant mounds have no hole at the center where ants exit and enter. Instead, fire ants make underground tunnels around the mound for leaving and entering.

This is one of the clear signs of determining whether you have fire ants on your lawn. They’re equipped to build their colonies in any type of soil. Their mounds are not tall, and they can reach up to a height of 18 inches which is the same size as other ant nests.

If fire ants appeared after rain, then it is highly possible they’re your silent neighbors. Fire ants remain underground during dry and hot weather to stay cool. When it rains, fire ants are forced to come out and continue building their mound after water gets into their tunnels. If one day you don’t see anything and the following day there are hundreds or tens of red ants in your yard or garden, a fire ant mound or colony is very near. 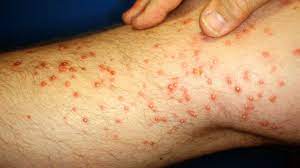 If you or your kid is unfortunate and gets stung by a fire ant, the severity of the pain will tell you a fire ant colony is around. A sting by a fire ant is more painful; it starts with an intense pinch and then burning or itching sensation around the stung area.

The wound will resemble a pimple, but they’re round blisters filled with pus and will appear after about 20 minutes after getting stung. A fire ant sting can cause allergic reactions such as swelling of the throat or tongue, dizziness, and breathing issues in some rare cases. You should seek immediate medical help if you experience these allergic symptoms.

Fire ants are responsible for most ant stings, and they’re very aggressive. If a human or animal disturbs their mound, they’ll swarm out of nowhere, climb vertical objects and attack the intruder. This is very opposite from other ants, which will scuttle away if their mounds are disturbed. If you observe this kind of behavior in your yard, then it’s time to get rid of fire ants. If you unearth their mounds, you’ll see ants’ broods, eggs, pupae, and larvae.

Fire ants prefer moist areas when determining where to build their mounds, which is why they’re native to South and Central America.

To build mounds, sometimes fire ants don’t even need soil. This is why there are cases of people experiencing fire ants infestation in their properties and homes, showing how these annoying little beasts can rely on moisture to survive. Outside, fire ants prefer to build their mounds in areas that are sunny and open. Most fire ant colonies are built beside water sources and trees. 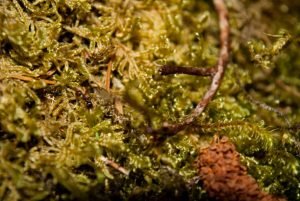 Fire ants can have different colors, and they’re not necessarily red-brown or red-black. Some of them are also black. In the United States, there are over five common species, all with unique appearances. There are other insects that look similar to fire ants.

Although one sure way of examining these features is by catching a fire ant, they can tell you it’s time to treat fire ants. However, it’s wise to get a professional to help you identify fire ants infestation.

If you reside in the Southern part of the United States, you’re more likely to experience a fire ant infestation. This is because, in the south, the climate is ideal for fire ants infestation: there is warmth, gentle winters, and high humidity. These southern states where fire ants are common include:

If you see the features we’ve discussed and live in these states, you’re more likely to face a fire ant infestation, and you should start thinking about pest management efforts.

If you spot a fire ant infestation in your home or property, don’t try to use your method to control or treat the infestation by yourself. Contact a licensed fire ant exterminator company. It is the only sure way to get rid of fire ants without exposing yourself to these stinging pests. 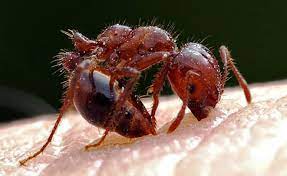 Also, keep your children safe if you spot fire ants in your yard and call a licensed pest control company. Don’t take chances because you never know if you, your kids, any member of your family, or even a visiting friend have allergic reactions to a fire ant sting.

Compared to other ways of killing fire ants, fire ant baits are slow-acting and can take up to a month to achieve their objective. However, they can be highly efficient and can achieve up to 80 to 90 percent fire ant pest management.

Corn grits that are treated with insecticides are the most common baits. Foraging ants take back the tainted food to their colony, where other ants eat it, including the queen. The baits can either make the queen infertile or kill her altogether. These baits have low levels of toxicity and are safe to broadcast over an extensive area.

This tactic involves pouring a liquid insecticide directly into the mound. The liquid will penetrate underground, and after a few hours, it will start killing ants. After application, only a few traces of the insecticide residue will remain on the surface. 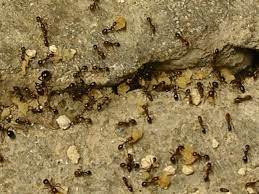 In this method, experts will broadcast dust over a mound. Granules will be applied in the same way, but water will be used to activate them to carry out their objective of fire and extermination.

This method first involves fire bait application in the affected area, followed by treatment of the mounds individually. Baits have to be reapplied numerous times annually while individual mounds are treated as soon as they’re spotted.

However, there is no best method that beats the help of a professional pest management company. They have the experience and training that will ensure 100% success and safety, especially while using these methods for fire ant control or extermination.

Choose Skymark Pest To Get Rid Of Fire Ants Infestation

At Skymark Pest, we have the best experience of getting rid of fire ants in Central Florida. We will conduct professional extermination services to ensure you’re free from fire ants now and even in the future.

Call us today and let us help you get rid of any fire infestation and avoid inconveniences such as leaving your house or closing your business for days.

CALL NOW AND GET: